Ha, just had to title this post that way. (try to belt it out like AreoSmith as you read it )

Here it is my (drum roll please…) 200th post. Technically it isn’t since this log has been around quite a bit longer the WordPress or blogging in general for that matter, but as far as WordPress is concerned this is it! so in honor of the occasion, and mostly just because I wanted to get out of the house I headed up to Pack Saddle Cave.  It was a sunny day and a little too warm for hiking, well truthfully it was darn hot but I was hopefull it would be at least a couple degrees cooler up at the cave since the trail starts well up the Kern Canyon at above 3000′. I made sure I had plenty of water and snacks loaded up on the Motorcycle and drove out of town towards Lake Isabella. From there it was a few short miles to Kernville and on to the parking spot across the street from the trail head. It was still too hot but I’d come this far I might as well check out the cave. The trail started out promising enough, wide obviously maintained and heading up a gradual slope. All to soon though it was a steep grueling slog uphill with no shade in sight. The views were magnificent though so while I paused to catch my breath I took a few pictures.

View as I begin up the trail, looking back toward the river.

When I finally crested the ridge I could see loads of limestone outcrops all around, certainly a good area to find a cave. Unfortunately the particular outcrop I was looking for was across yet another gully. I began making my way downward trying not to dwell on how much that meant I’d be going back up on the other side to reach the cave. At least there were trees and a little shade along the creek at the bottom.

flower alongside the creek.

The cave is up there somewhere?

Now though the weather changed as a few thunderclouds rolled in and I nervously hurried along the trickling creek hoping to reach the cave still high above me before it rained. It was a short stretch of trail so soon enough I was safely past the creek. Not before a covey of Quail burst out from the bushes giving me a bit of a start. Just as fast as they appeared  though they retreated back under cover of nearby bushes so I didn’t get any pictures. A dozen ground squirrels sunning themselves on nearby rocks were just as fast but one stuck his head out long enough for a quick photograph.

peering from the rocks 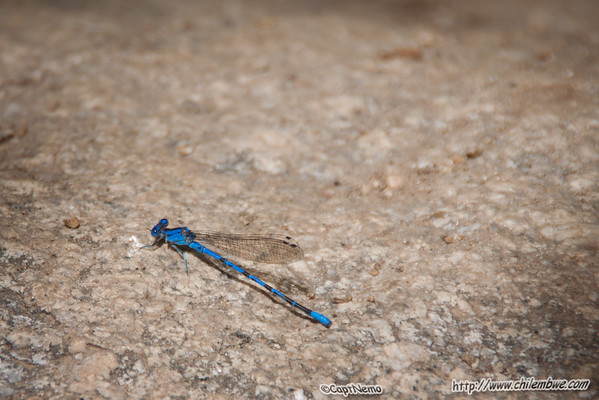 Damsel fly Down by the creek.

Lizard along the trail

Sure enough it was raining when I emerged from the cave but not enough to really trouble me and there was even a faint double rainbow.

I made it back down in time to stop at Mcnallys for a bite to eat before heading home.

Don’t forget to check out the Depth defying adventures at